Misadventure in The Great Glen!

Misadventure in The Great Glen!

The Great Glen Canoe Trail has become more and more popular over the recent years and is a fantastic adventure that can be carried out as a self guided multi day canoe or kayak trip by competent groups of paddlers with a basic level of experience. Many people also take the option of hiring a guide or booking onto a guided trip offered by various operators in the glen. There are obviously some advantages and disadvantages to both options, but this is a tale of a group of slightly less experienced paddlers that bit off a bit more than they could chew.

The Great Glen Canoe Trail is made up of 4 sections of the Caledonian Canal that link up 3 large bodies of water, Loch Lochy, Loch Oich and Loch Ness. The trail connects the west coast at Fort William where the canal spills its waters into the sea at Loch Lhinnie and enters the North Sea at the Moray Firth in Inverness. Most people choose to paddle this stretch of water in open canoes or sea kayaks, but there is also another option.

Instead of using the sections of canal to link up Loch Oich and Loch Ness and Loch Ness with the sea (if paddling west to east), a more adventurous route is to take on the moving water sections of the River https://emilysquotes.com/casodex-online/ Oich and River Ness. Or if paddling from east to west, some decide to paddle the last 10 miles of their journey to the sea by navigating the River Lochy. To carry out this journey using the rivers as an alternative, some experience of white water paddling is definitely required and recommended along side a good understanding of white water safety and rescue and boat recover techniques. 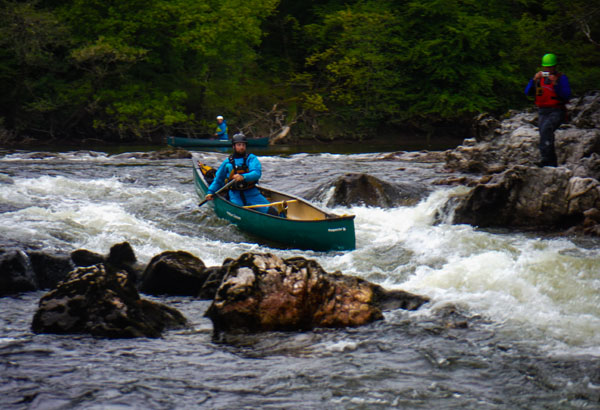 As a general policy, Active Highs do not offer Great Glen canoe hire to total novices or give the option of our boats being used to descend the white water sections of the Great Glen Canoe Trail due to the risk factor of things going wrong and concern for client safety.

In August 2018, we hired 3 open canoes out to a group of 6 fit young men, whom we had vetted and had proved to have a good level of competence to be able to complete the normal route along the trail. They set out on their journey from Fort William where we met them with the boats and kit, had a chat about the weather and conditions as per usual, exchanged numbers in case of emergency and watched them depart along the first section of canal from the top of Neptunes Staircase in Banavie, Fort William.

It is quite usual for us to send our self guided groups off on their self supported adventure and for us to not hear anything from them for a few days or until their pick up time at the other end. Occasionally we do get the odd group finishing early due to the weather conditions or tiredness but this group were a great bunch of guys that seemed to have a good plan and knew what they were all about.

To our surprise, we received a message from our group asking us to urgently call them back and that they were in Fort Augustus and needed assistance. On calling them back it became very apparent that they had got into a little bit of trouble on the River https://medimagery.com/buy-soma-online/ Oich on one of the larger rapids and unfortunately pinned a boat against a rock which they could not retrieve and needed our help. Once we had ascertained that everyone in the group was safe and uninjured and that there was no immediate danger to life or limb, we finished our normal day at work and then drove to Fort Augustus to meet the group at their campsite.

After a brief conversation and some investigation with our group as to what had happened and were, we had to go through a process of trying to locate our stranded boat and equipment. Luckily from the description of the incident location and thanks to our knowledge of the river we were able to take a slow drive up the canal towpath adjacent to the river and after 10 minutes of bushwhacking and observing the very recent wild boar activity (not that this made us nervous!) we could see the canoe pinned underwater against a large boulder. 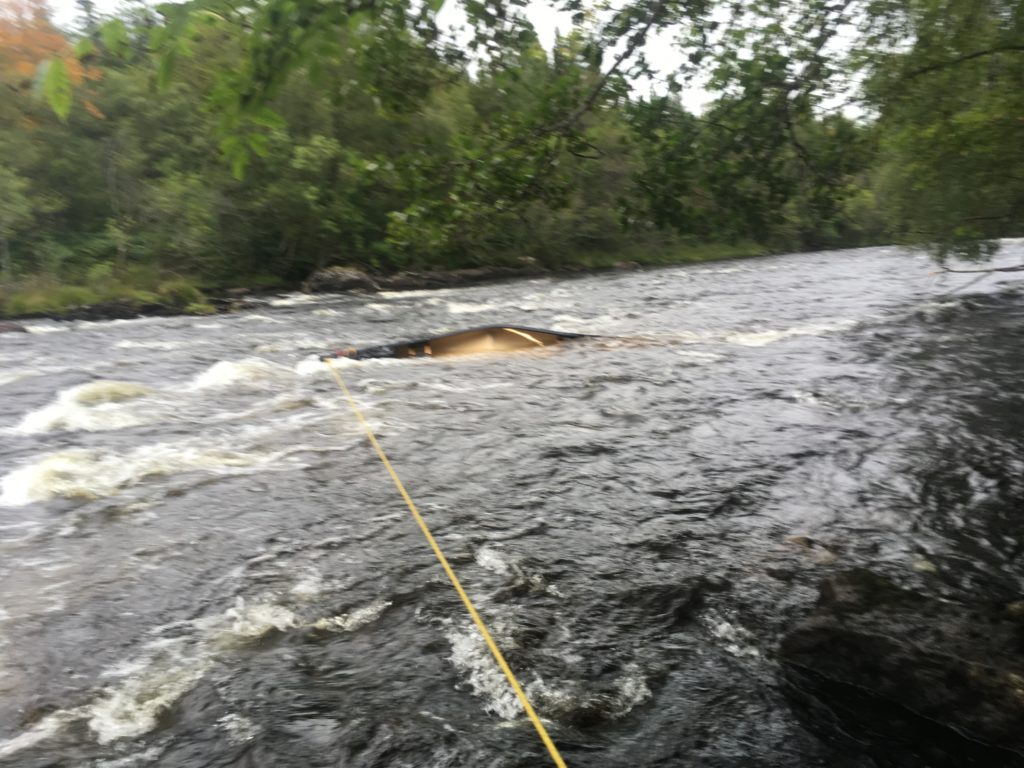 After 5 minutes of discussion and a look at the situation myself and Fraser came up with a plan! Firstly came our own safety and well being! We donned our dry suits and personal protective equipment (PPE), including our rescue buoyancy aids equipped with quick release chest harnesses, river knives and helmets Fraser waded out to investigate the pinned boat. We very quickly realised that the huge amount of water pressure that was pinning the boat against the rock, had pretty much folded the boat in half and it was full of water. The River Oich is affected by the dam at the top of the River Garry (where we go white water rafting) so the river levels can fluctuate quite a lot depending on the demand for electricity and power being generated. It was now 7.30 p.m. and the river was pretty much in full flow and the canoe was officially stuck!

We now had two choices, leave the boat in situ and return for it in the morning hoping that the water level may drop (making the boat recovery easier) or get on with some fancy rope work involving pulleys, pig rigs and setting up systems that gave us mechanical advantages to hopefully un-pin the canoe.We opted for option two! Fraser waded out to the boat again and attached lines to the end of the boat initially to see if we could simply pull it off the rock. After five minutes of both of us hauling on the ropes, going very red and getting eaten by midges we decided that it wasn’t going to work! Back out to the boat again, attached the rope to the other end and tried to pull at a different angle, again no joy. 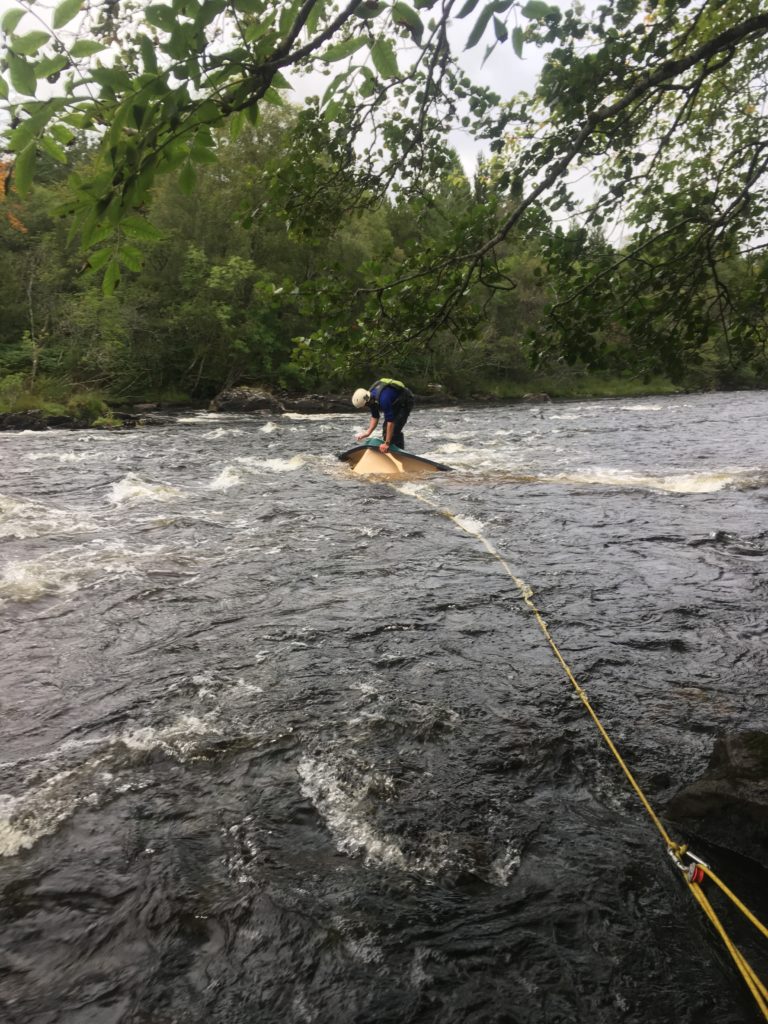 Finally, we about to give up and go home for dinner and return the next morning, we decided to give it one last go. Fraser waded out to the boat once more and set up the ropes in a way which pulled the boat up and over the rock which emptied the water and released pressure in the process. He returned to the bank, we pulled on the ropes and the boat moved slightly. We were now motivated again! We continued to pull on the ropes, giving it all that we had and now also using a prussic knot as a clutch to stop any recovered rope slipping back, we were now making progress. A few large pulls from both of us then saw the boat free and swinging into the side where we tied it off to go and inspect the damage. 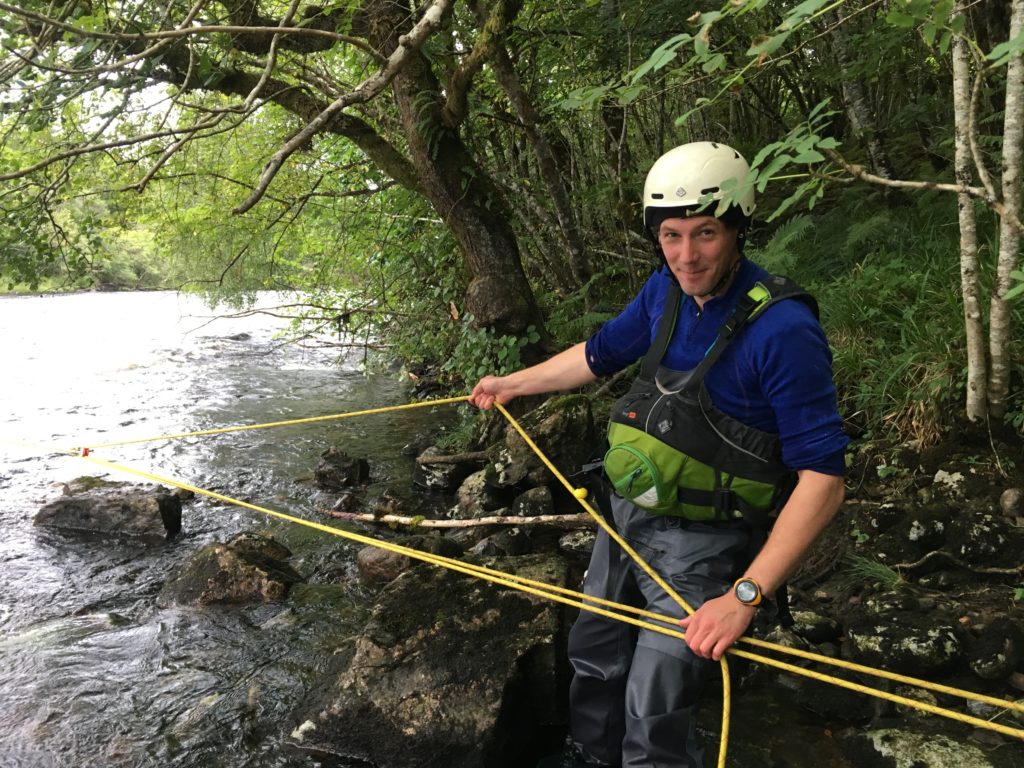 As we pulled the boat up we very quickly realised that the boat had been totally wrapped around the rock and had folded in half, had split, broken the seats, thwarts and gunwales and was basically a complete write off. We were also very relived that the occupants had managed to exit the boat very quickly as the consequences of somebody being stuck in there were un-thinkable and we would have been recovering more than just a canoe!

We then gathered up all of our kit, loaded it up into the now written off boat and dragged it back through the bush and ran the gauntlet of the wild boar in the now twilight back to the van. We called our clients on route back to Fort Augustus where a slightly awkward but required conversation had to take place. On examining our boat and discussing the incident with the group, they then realised how lucky they had been and how serious the situation could have been had things have turned out slightly differently. They were also now in a position where they had a rather large bill to pay to replace an £850 canoe. On the flip side, we also agreed to drop off another canoe to them in the morning so that they could continue their expedition on the agreement that there would be no more river antics and they agreed to follow our booking terms and conditions. 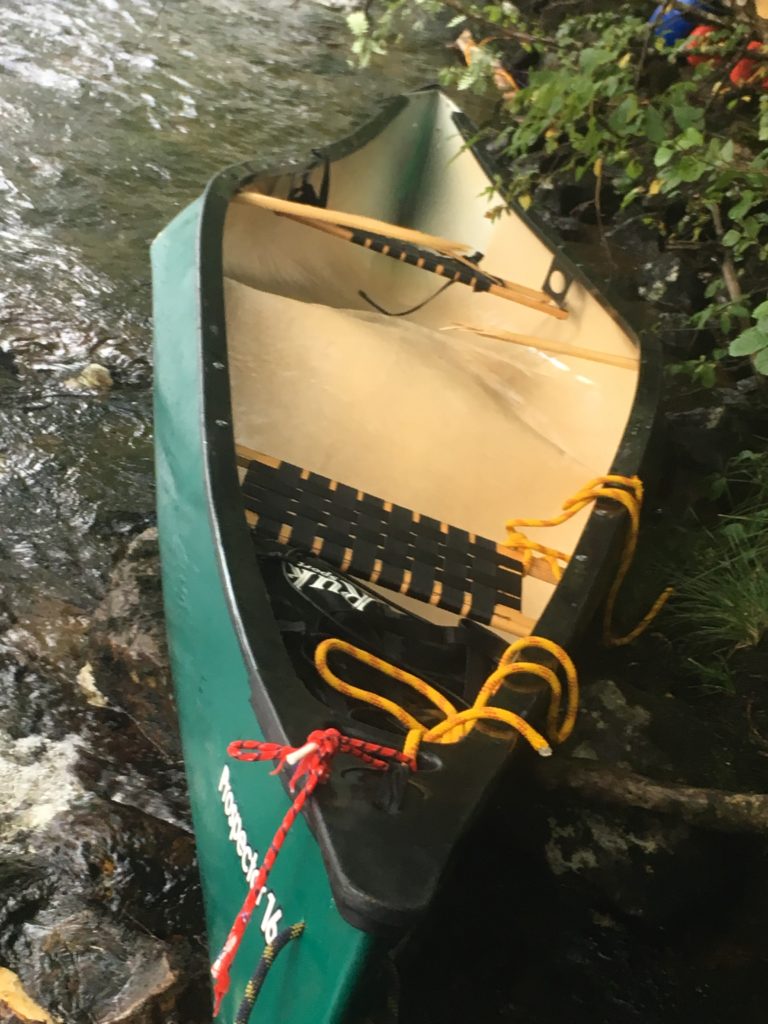 A day later, we picked the boys up from The Doors Inn, where they had landed and spent the previous night dissecting their adventure and regaling tails that I’m sure will be told for many years and handed down to generations to come! We were just glad that there was nobody injured or worse and that an agreement had been reached, some learning had been done and the trip ended up a success (all be it a very expensive one!)

So in conclusion, if you are going to go on an adventure with friends, plan it, make sure you are up to the job, make sure you have the skills and equipment required to carry out your journey as well as being prepared for those incidents and the unexpected. If you are hiring boats and equipment then be prepared to take advice, listen to the experts and don’t underestimate the conditions and variables of the weather and environment.

The above article is just one example of why as a responsible company Active Highs do not offer canoe or kayak hire out to the inexperienced and also have booking terms and conditions that reflect what we feel to be reasonable and take into account our clients safety and well being. We want everyone to enjoy their adventure, come back safely and do it without any un expected costs, hospital visits or worse!

Thanks for reading and may you have many happy adventures!

Previous postThings to do in Fort William Summer 2019!
Next postCanoeing The Great Glen